Written by the Brain Injury Alliance of Utah

Dr. Lynn M. Gaufin is the founder of the Utah Neurological Clinic in Provo Utah as well as a founding partner in Cognitive FX. 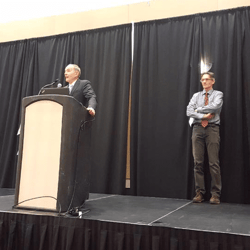 Before he began his practice in Utah he provided care for a significant number of individuals who sustained traumatic brain injuries during his career in the Army and his residency is Los Angeles.

Dr. Gaufin has been practicing for 51 years. He provides personal care to his patient’s during very difficult times. He creates a nurturing environment for his patient’s and insures that they feel understood and safe as they face life altering situations. He also includes families in the process to insure that all who are involved feel heard and understood.

We are proud to recognize Dr. Gaufin for his dedication to the people he helps and the brain injury community. Thank you for caring.

How COVID-19 affects the brain

Cognitive Behavioral Therapy for Post-Concussion Syndrome: What It Can & Can't Do

Rest and Concussions: Why Taking Brain Breaks Is Good for You

Suicidal Thoughts and Post-Concussion Syndrome: What Can You Do?

How We Found a Viable Treatment for COVID-19 Long-Haulers

Can a Chiropractor Help with Post-Concussion Syndrome?

Could Your Child Have Post-Concussion Syndrome?